The English Pointer: An Introduction

The English Pointer, also known as the Pointer, is a breed of dog in the Gun Dog Group. Unlike many sport dogs, this breed of dog is happy to just hang out with members of the family and as such they make excellent house pets.

The average English Pointer stands between 23 and 28 inches high at the shoulder and weighs between 44 and 75 pounds (the females are smaller and lighter than the males). Their short coat is very easy to care for, but their floppy ears should be cleaned on a regular basis and frequently checked for any signs of infection. 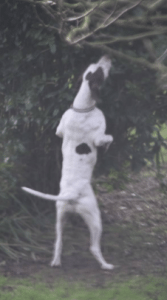 The standard for Pointers states that this breed, “gives the immediate impression of compact power and agile grace; the head noble, proudly carried; the expression intelligent and alert; the muscular body bespeaking both staying power and dash.” Known for their skilled work alongside hunters, the Pointer is a graceful dog with an elegant carriage. Their expression always shows their alertness and their bodies are muscular and athletic. The nose of the Pointer sits high atop the dog’s muzzle and they have a defined stop. The Pointer’s ears are pendant in shape and have are slightly pointed. They have long, elegant necks and straight, tapering tails. Their short and sleek coat is either white or white with liver, lemon, black or orange.

Male Pointers should stand from 25 to 28 inches at the shoulder and females stand between 23 and 26. The male weight ranges from 55 to 75 pounds and the female range is 44-65. When showing a Pointer, proportion and balance are of more importance than the size of the dog.

The Pointer sports a short, smooth, easy to maintain coat that comes in liver, black, orange or lemon and some have a white background. Many have speckles called ticking on the white portion of the coat. Tricolour Pointers are uncommon but do exist and they have a white base with two other colours for markings. The nose colour will be different according to the shading of the dog. Light Pointers have a flesh coloured nose, medium coloured dogs will have a brown nose, and darker coloured Pointers will have black noses.

Grooming a Pointer is a breeze. Their short, smooth coat is shiny and sheds lightly throughout the year. Once per week should be enough brushing to keep loose hair under control. Rubbing a Pointer with a chamois will cause his coat to almost sparkle. Pointers only need bathed three or four times per year, unless the dog has a knack for rolling in the muck.

Check the dog’s ears weekly for signs of wax build-up, irritation or infection. Clean them out with a cotton ball and a veterinarian-approved cleanser. Brushing the Pointer’s teeth on a weekly basis will keep tartar from building up and promote gum health.

The Pointer’s history is quite an old one, traceable through writings and artwork back to the middle of the 17th century. While the Pointer was refined in England, many canine historians credit Spain as the breed’s actual country of origin. The Pointer’s ancestors probably include Spanish pointers and a number of other breeds, such as the Foxhound and Bloodhound for their scenting instincts, the Greyhound for its tremendous speed and the Bull Terrier for its “bull-headed-ness” and tenacity. Spanish setters were almost certainly part of the mix. Spanish pointers were much heavier and more course than the Pointers we know today. These dogs appeared in Britain in 1713, at the end of the War of Spanish Succession, when British army officers brought them home. Italian pointers were also brought to England around the same time and were crossed with Spanish pointers, contributing to the Pointer as we know it today.

Early on in their development in England, Pointers were used to hunt and point to hares in the field, so that coursing Greyhounds could locate them and chase them down. The Pointer’s type, temperament and hunting ability were fairly well-standardized by the end of the 1700s and actually have changed very little since then. Pointers in America can be traced to the Civil War period, when they were brought to this country by their English owners.

The average life expectancy of the English Pointer is between 12 and 17 years. The increased health risks associated with the breed include cherry eye, epilepsy, hip dysplasia, and skin allergies. 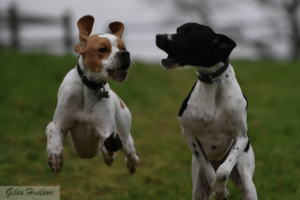 English Pointers are a true sporting dog who should not be confined indoors for a long period of time. They are athletic and energetic, and are happiest when they are running. They are sweet, gentle animals who are polite and welcoming to strangers and shouldn’t be relied upon to be watchful guard dogs. They are best suited for active families, preferably those who enjoy hunting.

English Pointers are rowdy and rambunctious and need a lot of exercise; and just when you think they’ve had enough, they’ll probably want more. This breed was not designed to be a household pet, but rather to be a sturdy, reliable hunting companion in the field, and the modern Pointer has not lost this desire. For owners who do not hunt, a commitment should be made to enroll their pointer in tracking or agility activities in order to satisfy their need to run and think. If a Pointer does not get enough exercise, they will resort to barking and chewing which may develop severe anxiety.

Training a Pointer in basic obedience can be difficult, but is an absolute necessity. They suffer from sporting dog ADD – they will be distracted by sights, sound and smells and will want to abandon training to chase after something more interesting. For this reason training should involve a lot food and should be conducted in short spurts. The two most valuable commands you can teach a rowdy pointer is “down” and “stay.”

House training a Pointer is a long process and many breeders and trainers recommend crating a Pointer until he gets the hang of it, which can unfortunately be several months.

Chasing is the Pointers biggest problem. Unless they are hunting in the field, they should be kept in a fenced-in yard or on a leash at all times. They will chase after anything that moves, and once they give chase, they are completely deaf to your calls to return home.

Rowdiness and hyperactivity are common in Pointers, even those who are properly exercised. They are always brimming with energy and love to greet everyone they meet, which usually involves a lot of jumping. Teaching a Pointer “down” and “stay” can save you from alienating your friends and neighbours. These are just the ideas of some fans of the breed; feel free to comment on these.